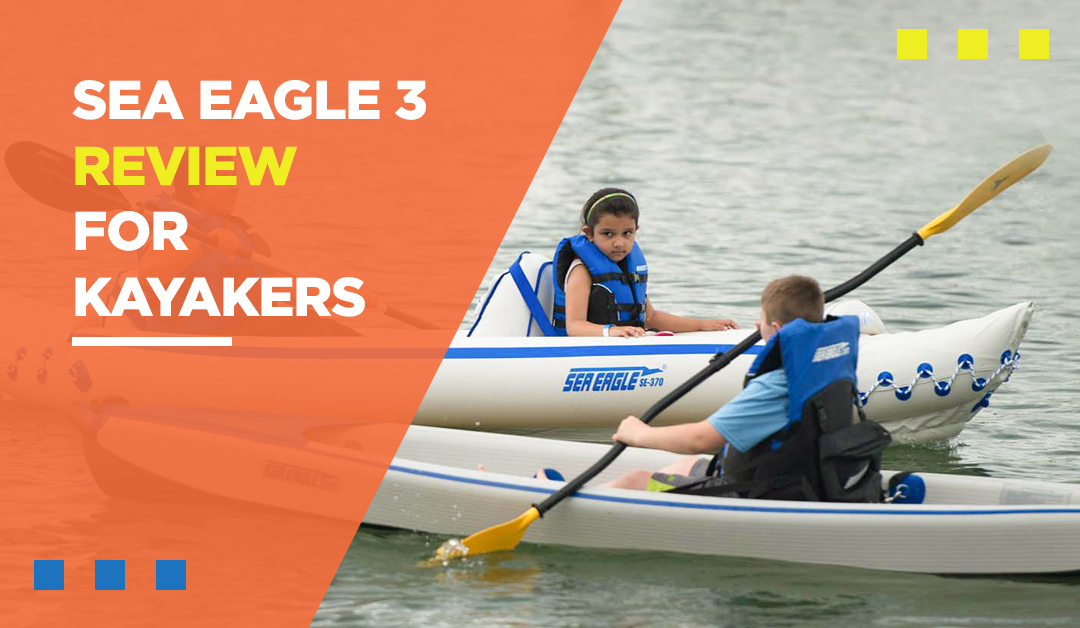 Is This 3-Person Kayak Worth It?

This SE 370 or Sea Eagle 3 review gives details about one of today’s innovative water vessels. If you’re in the market for a new one, you may find that this model may be what you’re looking for.

But is it the best choice for you? This article will look at the product’s pros, cons, and other information based on its build and style.

This kayak is inflatable, lightweight, and can hold about 2 to 3 persons. Plus, it’s compact, movable, and easy to store. Compared to others, this 3-person portable kayak has better features.

But, of course, it comes with its few drawbacks too. This article also compares it to the SE 330 that came before and from the same manufacturer. Hence, continue reading to know more about it.

Sea Eagle 3 Review Of Its Construction

The deflated leading boat and unassembled parts of the set fit in a carry bag. The hull dimensions, while collapsed, are 79 cm x 48 cm x 20 cm. Because of that, the 3-person kayak fit well in the trunk of a car.

It was even clear to see that it was something a large backpack could accommodate. Also, the entire group weighs about 15 kg. The unit wasn’t stressful to transport, and it didn’t even occupy a lot of space.

Hence, when it comes to portability, the whole thing is very movable. So, even before putting parts together, it already has beneficial features.

This 3-person inflatable kayak with a few parts to assemble didn’t take much effort to build. Constructing its collapsible AB30, double-ended paddles only required connecting the separate parts.

The paddle components have snap-button ferrule for easy assembly. After spreading out the hull, it took no more than 15 minutes to expand it via the foot pump included. Expanded, it became a little over 12 feet long.

So it doesn’t take a while to blow up the floor, side chambers, and spray skirts. 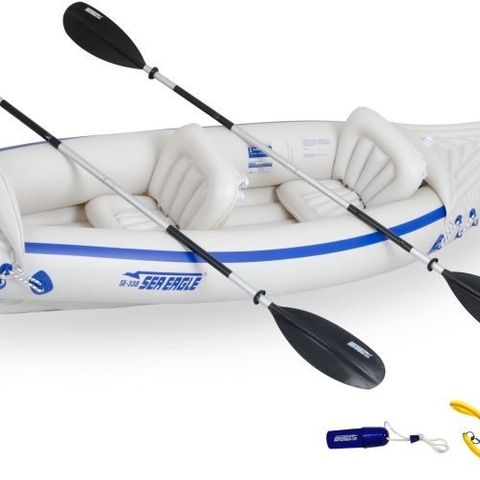 This Sea Eagle 3 review also points out its dependability in staying inflated. With its one-way valves installed, it didn’t lose air after inflation. After screwing the inner valves and caps together, the unit was ready to use on the water.

Plus, the inflation gauge and template helped make sure there was optimal inflation. So setting up everything was a breeze, and it was great to know it had things to ensure safety on the water.

Even the deflation and packing up weren’t difficult. After all, it only involved unscrewing the caps from the valves and folding the hull to reduce its size.

In this way, it was clear that the makers of these 3 people’s inflatable kayaks put a lot of thought into making them good.

Deluxe Inflatable Kayak Seats were convenient to use too. This Sea Eagle 3 review emphasizes them since they have special features too. The adjustable straps made the seating cozy.

Thus the passenger height and width didn’t become a problem at all. Also, the storage sections at the back were handy for carrying small items. They helped to keep mobile gadgets dry and free the pockets of contents.

Making them expand was fast, with the foot pump being quick to put air into the inflation chambers. Once blown up, they were easy to install. Also, they gave great back support and about 5-inches of elevation from the kayak floor.

Thus they make the whole set worthy of attention and praise.

What also makes this 3-person portable kayak special has rigid flooring. Also, it comes with two rear skegs. The floor design, with 5 tubes and tracking fins beneath, made it smooth to navigate the waters.

Going straight and fast was easy too. Its synthetic material for the hull was quite durable when tested. There was no worry about pressing into it, but it was clear that it’s not as durable as hard-sided models.

Though that may be the case, a dog’s paws with sharp nails didn’t puncture any holes on the sides and floor. Hence, it’s fixed with parts that are dependable in durability and aquatic navigation.

This part will show this item’s many positives and drawbacks. Included is its comparison to the SE 330 model the company called “Sea Eagle” made. It’s only to show why it’s a different and improved model.

Either model can be great for cruising lakes and even taking on Class III rapids anyway. So beginners and experts can use the SE 370. 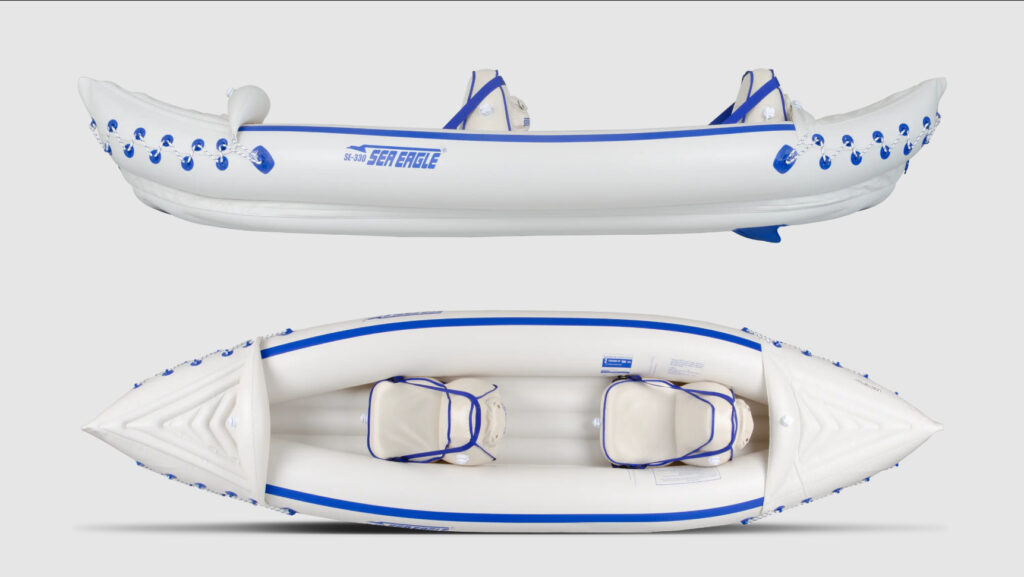 The SE 330 is a vessel that is usually for solo trips. For tandem journeys, the 370 is most suitable. After all, the latter includes and has space for two inflatable seats and AB30 paddles.

In size, the 370 is a bit longer at 381 cm and can accommodate heavier weight too. Plus, it’s somehow heavier to carry at 15 kg. The most weight the former can carry is 500 lbs, in contrast to the capacity of the latter, which is 600 lbs.

Yet the 330 model is shorter at 340 cm and lighter at 12 kg. The smaller one is faster to inflate, based on its design. But many find the newer to be more appealing due to its advanced features.

As part of reviewing this 3-person portable kayak, we’ll tell you what it was like when using the unit on and off the water. It doesn’t feel like you’re using a toy or amateur kayak when using this one.

Though it’s a vessel that depends on being full of air to float on water, using it for navigation feels awesome. It reaches speeds that are almost the same as hard-shell kayaks, but it can turn slow sometimes.

Also, it drifted on windy days too. The reasons for such things are likely because the unit sits higher on the water. After all, having some softness is the nature of an inflatable raft.

Thus it’s susceptible to directional and speed changes due to the force of the winds and currents. 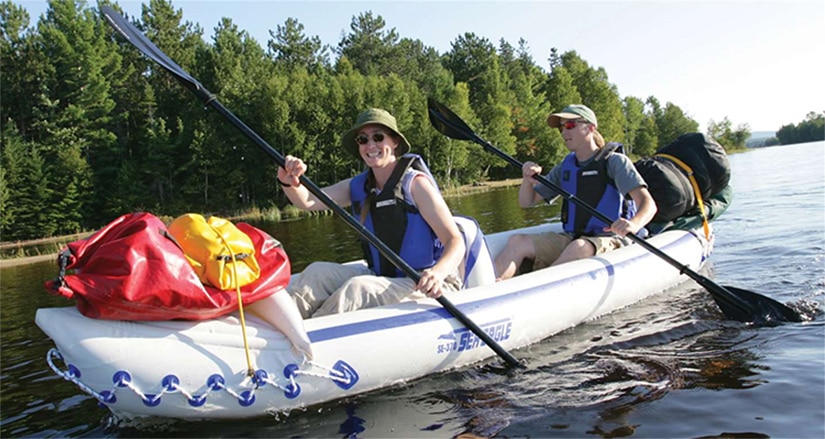 Using synthetic fiber instead of a hard-shell frame, it gets scratched and dented a bit from time to time. Although heating dents and patching holes can fix problems, it was clear to drive it far from rocky spots.

Docking it on sandy shores makes it easier to deflate and fold after use. Also, this 3-person kayak is easy to carry because of its material. One or two individuals can lift it with ease and drive it into the water.

Still, sitting on it may feel uneasy after a while because of the backrest height of the inflatable seats. To add, wedged between the sides of the boat, their stability depends on staying where they are.

So it’s what is nice for navigation for an hour or two and would only work well without excessive torso movement.

At the time of writing this Sea Eagle 3 review, the lowest price for the Pro Solo SE 330 is $249. The Deluxe SE 370 sells for $349. It’s quite evident why this is so, considering that the latter has more things to offer.

Because of the features of the Sea Eagle 370 kayak, it’s the choice vessel for many kayakers. It’s bigger, stronger, and often more reliable on the water.

Thus amateurs and seasoned boaters go for it despite that it’s more expensive than the 330.

Considering investing in the Sea Eagle 3?

Is the Sea Eagle 3 a good investment? We believe so. In fact,  buying this 3-person inflatable kayak might bring you years of enjoyment with a friend or 2. It isn’t that bulky to carry, comes with paddles and other extras, plus blows up to a long vessel that can hold 2 persons.

Even if it’s an inflatable device, it’s stable to paddle with speed. Compared to the cheapest hardshell kayaks that sell for $490, the SE 370 is way cheaper. We can say that it’s strong, flexible, and affordable for aquatic recreation.

So it is no surprise why many paddlers get this type for their kayak tours.

We hope that this review helped you in some ways to better understand the Sea Eagle 3. Also, we wish you could find the perfect 3-person portable kayak for outdoor adventures. Thanks for reading, and enjoy your next trip!

Inflatable Kayaks: Ultimate Guide | Everything You Should Know

Pros and Cons of Inflatable Kayaks

Inflatable Kayak Pros and Cons and Our Top Picks

What Birds Are Native to Florida?

How to Clean A Kayak